Sailing the Seas of Hypocrisy with Captain Honors. 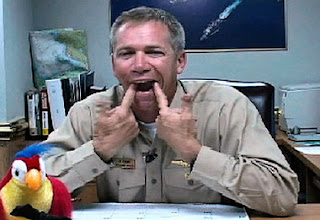 There is a large element of irony in this post thanks to the one that that I put up earlier this morning. Earlier today I wrote about my frustration with the way that many christians treat people who are gay. http://trippingstumblingwhilefollowingjesus.blogspot.com/2011/01/this-is-for-d-and-all-of-my-so-called.html
No sooner did I finish that, then a certain story seemed to blanket the news.
http://news.yahoo.com/s/yblog_thelookout/20110103/us_yblog_thelookout/navy-captain-may-be-in-hot-water-over-raunchy-videos
Since the weather outside is getting horrible again, and it's my day off, I think I'll have some fun.
Well, it turns out that the former Executive Officer of the aircraft carrier, the Enterprise, made some videos for the entire crew to watch that were less than civil or polite. (One could argue that the videos in question were "Mature," not not in the positive sense.) This man is now the captain of the Enterprise. (It would appear that his tenure as captain will most likely be rather short lived.)
For the record, I have never served in the military. So I understand that there is only so much that I can say on this subject. However, I have worked in both the Public & Private sectors. With that in mind, I can state with out hesitation that if one of my school administrators, or one of my corporate higher-ups, had made a video for all of us to watch with the type of subject matter that Captain Honors made for his sailors, their butt would have been tossed so fast & far from our offices that they would have landed in Wisconsin.
On a personal note: If someone in authority made a son or daughter of mine watch nasty stuff like this, I would punch him solidly in the nose. Furthermore, I find a massive irony in the very name of Captain "Honors." To me, it's a bit like the owner of a porno shop having the last name of "Chastity."
I find all of this fascinating in light of over turning of "Don't Ask/Don't Tell" this past month.

Now this is merely my opinion, but it just seems to me that I do not have to agree with all of an individuals activities & choices to allow them to have a job. In particular, if that person wishes to take a position where they are fully aware that their life may be put on the line for my protection, who am I to tell them that they cannot?
Admittedly, my thoughts on this have been evolving over time. The biggest change came after the 9/11 attacks. I read a news story about over a dozen service people being thrown out of the militaries' language school out in Monterey, California, because they were gay. Apparently they had been studying the various language of the very people who sought to murder as many Americans as possible...but that wasn't good enough. This struck me as a brilliant way to blow your own foot off with a shotgun.
I have a friend of mine who is ex-Navy. He is proud of his service to our country, and despite having been in the Navy...which is the sissiest of all the services, he was a very good sailor.
It should be noted that along with the normal drills that military people go through, he told me that the Navy also requires a great deal of musical acuem and dance skills. Often, he has regaled me with stories of his time at sea, where the Skipper would order the men to simply break out into song.
The following is a video he sent me from the day that his ship was about to set sail from Dubai.
He also happens to be a guy who likes other guys.
I little while ago, I wrote a response to something he had posted on his own blog about the whole "Don't Ask/Don't Tell" situation. It went like this:
"Once upon a time, my family's house caught on fire. When the fire fighters showed up to put out the blaze, I discovered that two of them were Lesbians and another guy was Gay. I told them that they were unfit to help. A forth guy told me that from time to time he was a little Bi-curious. I allowed him spray his hose on the garage. The last guy told me that he had spent the previous evening at a strip joint getting dances from "Hootchies." He went on to assure me that he had then gone home and spent the rest of the night viewing Straight pornography. I told him that he was perfectly fit to put out the blaze.
Unfortunately, by that point the house was consumed by the flames and my family was dead.
But at least I stuck to my principles!"
I think you get the idea.
Again, I have never served in the military. I can only say so much on the subject. This is merely my opinion, so feel free to disagree.
Peace
Joe
P.S. There is a potential up-side to having more members of the armed forces "Out." For instance, precision drill may have a whole new flourish to it.
Of course, if we had lost the War for Independence, the Air Force might have an entirely different style to it.
Posted by Joe at 2:35 PM