But give me only my daily bread. 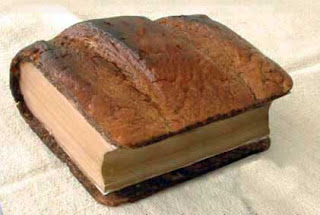 So a few days ago my pastor asked me to do a little digging into a preacher named Francis Chan. Both of us are only mildly familiar with him. But a dude at Living Waters was recommending his books and such. So Pastor Scott was curious.
So I DID do some digging and was very disappointed to see that no one called him a heretic. I prefer my "Christians" to rock the boat a bit, because that's how you know that they are on to something.
Anyway, for a guy who has had way too many tragedies in his life, Mr. Chan certainly adores Jesus. In fact, what I found most compelling...and convicting, is his approach towards money. I had seen a variety of videos with him speaking, but I stumbled across one that really hit me. (This is in light of that fact that Mr. Chan has a rotten habit of giving most of his money away.) Take a look.
"Two things I ask of you, O Lord;
do not refuse me before I die:
Keep falsehood and lies far from me;
give me neither poverty not riches,
but give me only my daily bread.
Otherwise, I may have too much and
disown you
and say, "Who is the Lord?"
Or I may become poor and steal,
and so dishonor the name of my God."
Prov. 30:7-9
Wow! I don't hear a lot of people praying prayers like that...myself included.
More often than not, I hear messages like this.
Copeland also believes that Jesus and the Disciples were independently wealthy business men, and that's why they were able to travel around Israel without having to work. The proof text that they use is that they had a treasurer...Judas. (GREAAAAAT!)
Anyway, I was really convicted by what I heard Francis Chan say. I realize more and more how selfish I am with my money. I don't have much, but I could certainly do a better job of honoring God with the way I use it.
I've been stubbornly refusing to write God a "New Years" letter for days now. I think of it as a written prayer for the year a head. I need to get off my lazy butt and do it. One of the items weighing on my heart now is the whole money thing. I need Jesus to by my LORD, and not just my Savior. And that means turning everything over to him....the way I use my money, too.
On a side note, I find it interesting that the writer of that proverb ties "Falsehood & Lies" into the whole money issue. They do seem to feed off each other plenty of the time. Something for me to think about for a while.
Peace
Joe
P.S. A song just popped into my head as I was writing this, and I think it's appropriate for this post.
Posted by Joe at 9:08 AM