Jingle Dog and other Christmas songs. 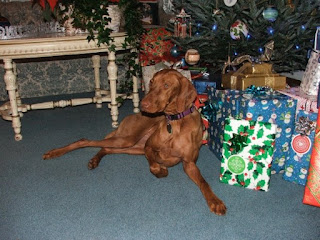 I jut got back from my folks place. I've been making trips to drop off the various presents that I have been wrapping. It would appear that I might be overdoing it as usual.
I don't know why, but I really do enjoy wrapping gifts. I can't say that I am all that talented in most areas of life. However, it would appear that I do have a knack for wrapping things. I can make a box of dead squirrels look awesome. (Perhaps I shouldn't have written that, because if my Dad reads this he'll know what he's getting on Christmas Eve.)
Anyway, one of the funnier things about Christmas for our family is how much the dog gets into it. Seriously, Rika absolutely loves Christmas. She has more fun than the rest of us combined. She even knows which packages are hers. She will go up to them during the day and sniff at them. When it comes time to open them, she pretty much freaks out. She also has the amusing habit of trying to stuff her mouth with as much wrapping paper as possible, and then prancing around the living room showing off for everyone.
Perhaps I should have gotten a prescription of Ritalin for her.
Well, my sister & I went out on a big hunt yesterday for presents. Honestly, we don't really spend all that much. But we both try to find one gift of significance for each family member. The rest are just fun odds & ends...which are then wrapped up in an incredibly awesome manner by me.
Needless to say, there is a huge load of various christmas carols being played where ever you go. Most of the songs are incredibly annoying. However, we had lunch at Ikea, and they were playing some of the strangest christmas tunes I'd ever heard. That was actually rather refreshing. That got me thinking. (Always a danger in that.)
I felt like posting something today. But since I have to head to work in less than an hour, I thought I would sort of cheat. The following are some of my favorite Christmas tunes, along with commentary by yours truly. Enjoy. (And if you're lucky, at least one of them will get lodged in your brain like a Yuletide sliver.)
First up, Sarah McLachlan
Oddly enough, of all of the "Secular" christmas tunes out there, I really think that this one could easily be sung in church. For a Believer, the war really is over. Jesus won. It's as simple as that.
Strange, but this song has been stuck in my head for over a day now. I was singing it at work last night. Also, if you check it out on YouTube, you will see that John Lennon's tune has been re-recorded by more folks than almost any other christmas song. The Three Tenors even have a version out there. (Weird!)
Back after Rattle & Hum came out, I sort of thought that U2 had forgotten how to Rock n' Roll. Turns out I was wrong...thankfully.
Next up, the Ronnettes. The video is actually quite horrible. However, the song is great. Back in 63', crazy Phil Spector produced the album, "A Christmas Gift for You." It's still a classic, and the Wall of Sound is always excellent.
And now for a flashback to my childhood. I think that this is proof that the Brits will always be better at music than most Americans. (Sorry, but that's just a fact.) Sad to say, the message is still relevant.
Early on, back when 60s Rock was getting mixed with "Progressive" music, Jethro Tull came out with an interesting take on the christmas story. I've always loved this neo-medieval style. (The message is a good one, too.)
Finally, every year David Letterman has Darlene Love on to sing her hit from that Phil Spector album I mentioned earlier. You get can mighty cynical about the season. You can get hugely annoyed by the horrible music and rampant consumerism that is in your face...and entertain thoughts on all of the people who really ought to get nothing but lumps of coal this year. However, unless you are a heartless, puppy & bunny eating, card-carrying member of the communist party, there is no way that you can't get a smile on your face and enjoy this song. (That's a fact, kids.)
Merry Christmas
Joe
Posted by Joe at 11:23 AM