A true story...bathed in "Crystal." 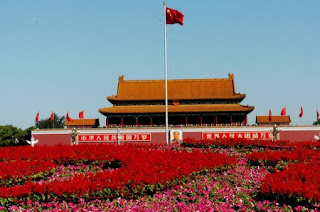 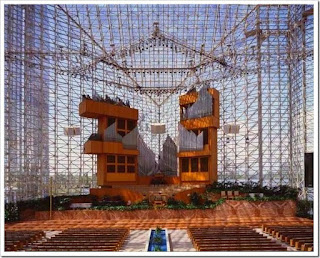 Many, many years ago, I went out to the L.A. area of California to visit a buddy of mine who was going to Fuller Seminary in Pasadena. While there, I discovered California Pizza Kitchen right across the street from the school. (And a good time was had by my stomach)
Also, while out in Cali, we went to a rather famous "Church," that you may have seen on the T.V. And that is what this story is about.
But first, two things to think about:
#1. This thought would be for every single person out there who calls themselves a "Christian." Keep your eyes firmly, firmly, firmly fixed on Jesus, or you will only end up in trouble. The moment you take your eyes off of him, you will begin to focus on and follow other, smaller gods...i.e. yourself, your theology, philosophy, etc. (I know this because it happens to me every single day in little, tiny annoying ways.)
#2. If you are a pastor, or a leader in some ministry of some sort, beware of the following phrase: "My Church." It is the phrase of death. I figure that such a thing is fine to say if you are one of the regular attenders. But if you are the head pastor and such, never, ever say that phrase.
Why?
Because it is NOT your church. It never has been. It never will be. The "Church" belongs to Jesus. He is it's head. It is his bride, and it is made up of every single Believer. It does not belong to any one human. You should see more Red Flags then Tiananmen Square when you hear a pastor use the phrase "My Church."
I can promise you that pastors who use THAT phrase are in for trouble. Hopefully, some Elder, Deacon or the average parishioner will call them on it. Often, it is too late by then. (I should hasten to add that Pastor Scott, my main guy at Living Waters in Lakeville, has yet to use that phrase. Which is good, because I have explained to him that if he does I will beat him up.)
I'll DO IT, Scott...I really WILL!
SO ANYWAY:
Back in Pasadena...myself & my bud went out to see a very famous church in that area. I will give you a hint as to which church and which pastor I am writing about. It has a very nice cathedral that used to be a drive-in theater, and most of it seems to be made out of crystal.
It really was a beautiful place. Most folks would enjoy going to a building like that on Sundays. It really is nice and happy.
As it turns out, the tours for that day were over. (I thought that touring a church outside of at least 100 years was a little odd anyway...figured that we would just poke around.) However, a secretary there gave us a private tour.
I listened very carefully to that secretary as she showed us everything. (I'm "Geeky." I seriously do watch and listen to people's body movements and such.) I noticed that she referred to that famous Pastor as "DOCTOR," even though that particular title was merely an honorary degree...from some seminary some place given out for being famous.
The weird part is that after referring to "Doctor So-and-So" for over 20 minutes, the FIRST time she mentioned the name of Jesus was at around minute 30. That told me a great deal.
Makes you think, anyway...
Now listen, I am in no way saying that this pastor is a bad guy. I really do believe that his "Think Positively" attitude is great. Seriously, how can you not place your faith in Christ and not believe that "God is Good!" and that he will cause all things to work together for good? I have seen folks respond very positively to Jesus because of this guys preaching.
That having been said, the great temptation of ALL men are three things: MONEY, POWER & FAME. (Women actually have five...Money, power, fame...and nice purses and hand-bags.)
Is it possible that somewhere along the line, this man bought into his own hype? Is it possible that this pastor began to think of the church that he preached at as "His?"
So I woke up this morning and saw this story on Yahoo News and immediately thought back to the tour that his secretary gave us. You can read todays story here.---> http://www.startribune.com/nation/105208414.html
I have no idea as to what to say now, other than to say that I am so far from perfect that I really ought to be tossed into God's trash bin. I AM a sinner. I admit it! But thankfully, following Jesus into his kingdom isn't about guilt...because that would presume that there is something that WE could have done to overcome our sinful nature....but we can't. That's where Grace comes in.
I dunno. It just makes you think. (How does a church file for bankruptcy in the first place?)
SO, being "Poor in Spirit", rather than judging this man, or "HIS" church, with all of it's complications...maybe we should just sit on our butts and pray...for him AND ourselves.
It's called "GRACE" for a reason.
Peace
Joe
P.S. HEY, at least he isn't like THIS guy. (This is for you Damon.) Trust me, he'll get the joke.
Posted by Joe at 7:20 AM