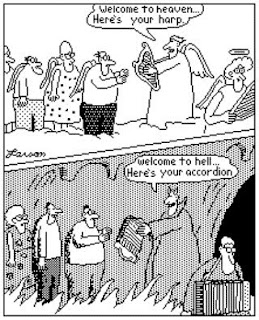 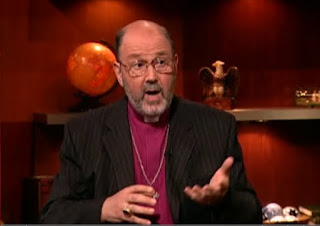 Eons ago, when I went to Bethel college, there was a girl in one of my classes who told myself and some others a very strange tale. She attended a very small and VERY "Charismatic" church. At one of their meetings, a boy prophet got up to tell them about heaven...because he had been there. (I think she said that the boy was about 12, and he had gone to heaven when he was around 9 or 10.)
The boy said that in heaven, Elijah prunes the trees and Moses cuts the grass. He said that the flowers all tasted like candy, and that bubblegum grew on many of the trees. I know that I am not getting much of this right. It's been ages since she told me this. However, I do recall that as she told me what heaven was supposed to be like according to this boy, I thought out loud "Well, if THAT'S what heaven is like, I don't want to go."
And I'm sure I've been damned ever since.
Look, the most likely explanation was that this boy had a dream one night. He told his mom about it. She, having a both a very soft heart AND mind, got way too excited about this, and the next thing you know, they have a rather odd ministry.
On the other hand, we in the West have inherited a Greco-Roman world view of life. And we often mush that onto how we interpret Scripture. If you were forced to read Plato's Republic in High School, you will recall his analogy of reality and the cave.
Socrates said that we are all at the back of a cave staring at shadow puppets cast onto the back of that cave. This is what we perceive to be reality. But Socrates said that true reality was to get up and out of the cave all together. In other words, true reality came when we would leave our physical bodies (i.e. Die!) and become purely spiritual/metaphysical beings.
This is where the idea in Christianity came from that when we kick the bucket, we simply float around on clouds playing harps. (Yeah, I know that I've massively simplified this subject. But that is it in a nut shell.)
Scripturally speaking, both that boy prophet and Socrates are way off base. There IS a massive physical component to the next reality. It's very "Earthy" to use a base term. But it is certainly more than bubblegum on trees.
N.T. Wright is a scholar that I am beginning to learn more about. He is the Bishop of Durham over in the U.K. I first came across him in Lee Strobles' "The Case for Christ" and "The Case for Faith." He's a clever fellow. (Great accent, too.)
So anyway, Time magazine interviewed Wright a while ago. He has quite a bit to say about how Christians have often misunderstood what the new heaven and earth will be like. I'll post a little of what he had to say here, but then link the rest of the article afterwards.

TIME: At one point you call the common view of heaven a "distortion and serious diminution of Christian hope."

Wright: It really is. I've often heard people say, "I'm going to heaven soon, and I won't need this stupid body there, thank goodness.' That's a very damaging distortion, all the more so for being unintentional.

TIME: How so? It seems like a typical sentiment.

Wright: There are several important respects in which it's unsupported by the New Testament. First, the timing. In the Bible we are told that you die, and enter an intermediate state. St. Paul is very clear that Jesus Christ has been raised from the dead already, but that nobody else has yet. Secondly, our physical state. The New Testament says that when Christ does return, the dead will experience a whole new life: not just our soul, but our bodies. And finally, the location. At no point do the resurrection narratives in the four Gospels say, "Jesus has been raised, therefore we are all going to heaven." It says that Christ is coming here, to join together the heavens and the Earth in an act of new creation.

TIME: Is there anything more in the Bible about the period between death and the resurrection of the dead?

Wright: We know that we will be with God and with Christ, resting and being refreshed. Paul writes that it will be conscious, but compared with being bodily alive, it will be like being asleep. The Wisdom of Solomon, a Jewish text from about the same time as Jesus, says "the souls of the righteous are in the hand of God," and that seems like a poetic way to put the Christian understanding, as well.

TIME: But it's not where the real action is, so to speak?

Wright: No. Our culture is very interested in life after death, but the New Testament is much more interested in what I've called the life after life after death — in the ultimate resurrection into the new heavens and the new Earth. Jesus' resurrection marks the beginning of a restoration that he will complete upon his return. Part of this will be the resurrection of all the dead, who will "awake," be embodied and participate in the renewal. John Polkinghorne, a physicist and a priest, has put it this way: "God will download our software onto his hardware until the time he gives us new hardware to run the software again for ourselves." That gets to two things nicely: that the period after death is a period when we are in God's presence but not active in our own bodies, and also that the more important transformation will be when we are again embodied and administering Christ's kingdom.

For the rest of the article, click here. http://www.time.com/time/world/article/0,8599,1710844,00.html
Look, I know that this kind of topic is not everyone's cup of tea. For some, I suppose that it is the cure for insomnia. Still, I find this type of thing fascinating. I love the idea of a physical reality in the next life. But I want it to be mind blowing and amazing, not like a candy shop. I also do not like the idea of sitting around on clouds, playing harps.
Seriously, the infinite, creator God of the universe can certainly do better than that. If not, then I don't want to go. (Thankfully, I'm not worried about God's ability to blow my mind.)
Now, for those of you who think that all "Christians" are boring, legalistic, dull, and vacuous, stuffed shirts (Hhmmmmmmmm...no comment.) here is a clip from the Colbert Report with Bishop Wright.
I kind of like the idea of settling theological disputes with a round of golf. "One dogma per whole."
Peace
Joe
Posted by Joe at 6:59 AM