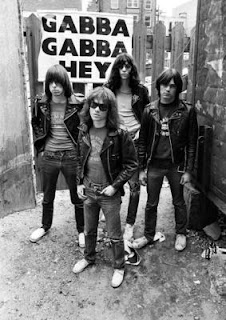 I stumbled across something rather cool the other day. Back in Bethel College I had a professor named Roger E. Olson who taught theology. He was little guy who looked very much the part of a true Intellectual. (Not sure if that is a compliment or an insult.) He also happened to be a very, very nice guy who was quite approachable.
I don't remember the entire context, but one day we got on a discussion of meaningless words & phrases. He made the statement that using a nonsensical phrase or argument was the equivalent of saying "Creech, creech" to people and expecting them to accept it as valid.
Somehow, we managed to slide that into a brief discussion on the Ramones, and their use of the term "Gabba, gabba HEY!" (It's been a long time, so forgive my lapse in perfect recall.) At any rate, I do recall that we drew a cartoon bubble on the chalk board with "Creech, creech" in the middle. Dr. Roger posed next to it as if he were speaking, and we took a photo of it. I still have that picture somewhere. I should try and dig it up one of these days.
SO ANYWAY, the other day I read a book review on the Imago Dei blog about a book titled The Mosaic of Christian Belief. http://www.imagodeicommunity.com/blog/community/book-review/ It's about the commonality of beliefs that the church has embraced throughout 2000 years of it's history...despite the ridiculous theological spats that we allow to divide us. (Calvanist VS. Arminian, for example.) Lo & behold, it was written by my old professor. Obviously, I have no choice but to go out and find this book now.
It turns out that my old Prof also has his own blog site that I have, of course, added to my own. Feel free to check it out. http://www.rogereolson.com/
Unfortunately, Dr. Olson did not stay at Bethel College. A while back, our denomination and college had a bit of an UN-Civil war. Greg Boyd, a pastor at Woodland Hills and teacher at the college wrote a book espousing "Open Theism." John Piper, also a local pastor and professor...who is a hyper-Calvanist, was so incensed by this that he sought to have Dr. Boyd expelled from the college. Dr. Olson resigned in protest, sighting that such an issue is hardly a matter of salvation, and that of all places, an evangelical college ought to be open to civilly discussing a third or forth level of importance issue such as this.
I have not thoroughly studied Open Theism. From what I do know of it, I can't say that I agree with it. But what I DO know...for a fact, is that Dr. Boyd loves Jesus zealously and jealously, and is an excellent apologist for the Christian faith. It's just a tragedy to me that this is not good enough for many.
I should also state that I have immense respect for John Piper and have seen with my own eyes how much he loves Jesus with a burning passion. I attended Bethlehem Baptist (Where he preaches) for many years while in college. I ended up being extremely dissatisfied with his emphasis on Predestination above all else. Especially after he preached a sermon on how everyone is predestined before the beginning of time to either heaven or hell...and then asked for more support for Missions. (You HAVE to see the irony in that.)
I wish that my fellow Believers would come to understand what really matters in God's kingdom, and what is merely a great topic to discuss over beer & pizza.
Well anyway, check out Dr. Olson's blog, and maybe his book too. In the mean time, in honor of my old professor and his connection to the Ramones...in a VERY round about sort of way, I now present:
Dr. Olson, you still rock!
Peace
Joe
P.S. What the heck. How about one more on this lovely, sunny Autumn day?
Posted by Joe at 7:46 AM