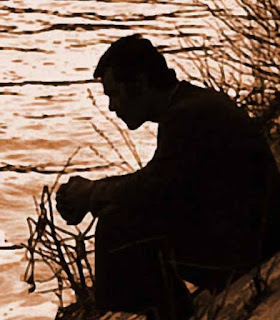 I'm up early again because I have more "Stuff" on my mind.
The last few days I have had a lot of "Stuff" running around in my head.
What if... what if you had a man walk up to you and say, "Return to where you were supposed to be all along, because the kingdom of heaven is coming very close to you?"
The other night at work, I decided to educate myself on break by borrowing one of those gossip rags from the magazine rack. (Don't worry, I always put them back when I'm finished.) I think it was US, or Okay...one of those magazines that have more pictures than words, and all of people who are famous for being famous.
I looked through the pictures to see what it is that I am supposed to do to be cool. I saw photos of people that I am supposed to model myself after to be considered acceptable in the eyes of others. I saw pictures of women in dresses that were compared to other women in other dresses, and I was told which outfits were kosher, and which were not. I saw a picture of a man with large muscles and the makings of a future melanoma condition. I was told that I should be like him because he is from the Jersey Shore, so I should be too.
The last few days I have had some interactions with people I care about a great deal. Some are Believers, some are not. They told me that the temporal pursuits of this life are extremely important to them. I saw, and still see, that these pursuits inflict great pain on them. I saw that these pursuits fill them with a great emptiness. I also saw that they were not willing to give them up for something better. To give them up and let go of the things that were hurting them would require an admission that they were not God...and that was unacceptable to them.
What if...what if a man walked up to you with a very confident smile on his face and said, "Turn around so you don't miss it. Open your eyes to see that the Kingdom of God is drawing very, very close to you."
I have a bed-time story for you. It is the story of Don Rabbit, from Donald Miller's book, Blue like Jazz. Click on the link to see & read the story. Don't worry, it's short.
http://www.donaldmillerwords.com/images/DonRabbit.pdf
"Sometimes the things we want most in life are the things that will kill us."
I see a lot of hurting people in this world. I see people who are unable to put a name to the thing that they bow down to, the very thing that will kill them. I see people who are unwilling to lay their pain and emptiness at the feet of the one who loves them...the only one who can fill them and heal their pain, because to do so would be to admit that they are not God, but that he IS.
To often, we wrap our agony around us like an itchy, filthy blanket on a hot & humid day. We wrap it tight, even though it wreaks of sweat and itches like crazy. It is what we know, and the pain we know is easier to accept than the unknown freedom & peace that is waiting for us. (I know that for a fact, because I lived it.)
What if...what if a man came up to you with confidence and love in his eyes, and a welcoming smile on his face, and he said "Come back to where you belong, because the renewal of all things is crashing into this fallen world and your broken life." And the man then said, "Blessed are the losers, the morally bankrupt, those with out a wisp of Religion, the helpless, the shattered and broken, the addicted, the girl who just had an abortion, the faggots, the thieves, and those who couldn't tell the truth if a gun was pointed to their heads...because God is on your side and he wants to make you whole again."
What would you say to that man?
For more on Donald Miller's Blue like Jazz, which will be coming out in movie form in a bit, click here.
http://www.bluelikejazzthemovie.com/
Peace
Joe
Posted by Joe at 12:08 AM