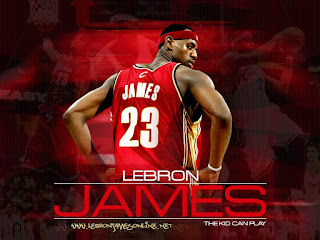 So I was up early this morning because I was having trouble sleeping. There was/is some stuff on my mind that I have been wrestling with. Naturally, I start poking around the internet. Oddly enough, I tripped over some stuff that got me thinking...and I'll use a recent news event as an analogy.
Lebron James signs with the Miami Heat over his old team back in Cleveland. In the city of Cleveland, they burn effigies of Lebron. At a wedding party in New York City, Lebron is booed. Apparently, people don't like it when their god betrays them.
I could actually care less about Lebron James, and basketball in general. He's going to make millions upon millions of dollars, but he still can't pronounce the word "Sword" without emphasizing the "W" in it. But there sure are a lot of people who worship him.
A little over a year ago, Michael Jackson died. And there was much weeping & gnashing of teeth. Just the other day, Colton Harris-Moore, the "Barefoot Bandit" was finally caught in the Bahamas after being on the run for 2 years. He has a FaceBook fan page with tens of thousands of followers. (Apparently, the ability to cleverly break into people's houses and steal things is cause for celebration.)
What all of those guys have in common is that other than being entertaining, they haven't really done much for society or the world. They didn't cure cancer. They didn't find a vaccine for AIDS. They didn't end world hunger. But in many ways, we treat them as gods.
America is a very Religious country. It says so on our money.
Mark Driscoll is a pastor out in Seattle. Many of the things he says drive me crazy. But I give him a lot of credit for being an effective minister in one of the least Churched cities in the U.S.
As I was poking around the internet, I came across this. Take a look.
We often treat celebrities like idols, but I hadn't quite thought of a Bass Pro Shop being a potential god.
I think Pastor Mark is on to something.
Sometimes, the gods we worship are external, like celebrities and sports teams. Sometimes, the gods we worship are internal, more of a cerebral thing, like success, fame, advancement.
In the Old Testament, the three most common gods that the Israelites were always up against were Ba'al, his wife Ashera, and Chemosh/Molek. Ba'al was kind of rural god, a god of agriculture. His priests would cut themselves to awaken him. (I guess that made Ba'al the originator of the whole "Emo" trend.) Ashera was a sex goddess. You would go to one of her temples and shtoop the priest or priestess in return for good harvests and lots of kids. (The Madonna, or Lady Ga Ga, of the ancient world I suppose.) Chemosh/Molek was more of an urban god. You would sacrifice your first born child in return for business success.
Now watch this video clip.
I think that Pastor Rob is on to something too.
I taught for 3 years in a very wealthy school district. I saw that many parents worshipped Chemosh/Molek there.
An idol is anything that we put before the one true God, and that is what I am struggling with this morning. The idol that I am worshipping is me.
In the third Creation story, it says that the fall of humanity came about because we wanted to be "Just like God." It was not taking a bite from what ever that fruit was. It was that first impulse to reach for it and replace YHWH with ourselves.
Why is it so hard to give some areas of my life over to God? Why am I so willful and selfish? As a god, I do a terrible job. Forget controlling external things. I can't even control myself. Yet, my very nature is to strive for control, and to NOT hand over everything to Jesus.
When I sit down and spend time with God it feels really good. But getting me to sit down with God is difficult. Why is that? I hate my old nature. I try to take captive every though, but I can't seem to do it.
I don't know. I guess I'm just a little frustrated this morning.
"For we do not have a high priest who is unable to sympathize with our weaknesses, but we have one who has been tempted in every way, just as we are - yet was without sin. Let us then approach the throne of grace with confidence, so that we may receive mercy and find grace to help us in our time of need." (Hebrews 4:15 & 16)
Whatever else I may think or do, I can say this: My God can look at me and say "I know how you feel." Ba'al can't say that.
Peace
Joe.
P.S. Just for the heck of it, take a look at this video too. It does make you think about how Religious we are as a people.
"What has been will be again, what has been will be done again; there is nothing new under the sun." (Proverbs 1:9)
Posted by Joe at 4:09 AM