A Mommy of Noble Character 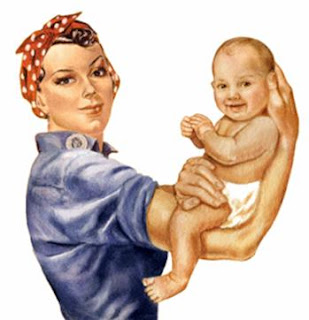 Today is "Mother's Day" in the U.S. I don't know if or when other countries might celebrate something like this, but they probably should.

At any rate, my birthday seems to fall on Mother's Day about ever 3 years, so I've always felt a little cheated by having to share the attention that I am so starved for on this day. I have since learned that I share the same birthday as the State of Minnesota (Which I live in & adore...from May through October), so my bruised ego has since been restored.

This morning at Living Waters, Pastor Scott preached from Proverbs 31, "The Wife of Noble Character." He pointed out that this chapter was written entirely by a fellow named King Lemuel (Probably a member of the royal family) and that ALL of it was taught to him by his mother. It is actually a poem...which gets lost when translated into English.
Lemuel's mom wanted him to know what to look for in a woman, and the traits she set before him had little to with the way the chick should look. Instead, the traits she set before her boy had everything to do with the future Mrs.' character. I won't bother writing down the whole thing, but here area few highlights.
"A wife of noble character who can find?
She is worth far more than rubies.
Her husband has full confidence in her
and lacks nothing of value.
She opens her arms to the poor
and extends her hands to the needy.
She is clothed with strength and dignity;
she can laugh at the days to come.
She speaks with wisdom,
and faithful instruction is on her tongue.
Her children arise and call her "Blessed;"
her husband also, and he praises her:
Many women do noble things,
but you surpass them all.
Charm is deceptive,
and beauty is fleeting;
but a woman who fears the Lord
is to be praised."
That is the type of woman who was "Good Enough" for Momma Lemuel's little boy.
I'm adopted. It's never been an issue for me, and in fact, has actually been an odd blessing. I found out I was adopted when I was about 7 or 8. One of my friends at the time was also adopted. We thought it was the coolest thing since sliced bread, AND that we were BETTER then everyone else because of it.
Seriously, we were "Hand Picked!" Look what your folks got. Ha!
So anyway, I shall now speak of my mom and give her praise. Why? Well, not simply because it is Mother's Day, but also because my mom is simply so much Cooler than yours. Seriously, that is not a biased opinion. It is merely a fact...so get over it.
My mother has the Spiritual Gifts of Hospitality & Service. She is amazing in the ways that she can entertain others...even strangers. It helps that she is a phenomenal cook, too. She has turned our cabin into a spiritual retreat for the members of her church over and over again.
She also happens to be one of the most down-to-earth people you will ever meet. I have never seen her put on airs or think that something was beneath her. Both my parents have minimal post high school educations, yet they possess a common sense education that gives them wisdom that you simply do not get from books.
Most importantly, my mom loves Jesus. And I have seen Christ move through her to touch others. I have never seen her think that she has God all figured out. No. Instead, I have watched her to be open & willing to learn from the Holy Spirit. She has set an example for me, and I am thankful for it. She is a humble person, and I can learn from her wisdom.
We live in a society where half of the homes are broken. I have worked with kids who come from unstable homes. Even in many of the homes where both parents are around, to often the parents treat their kids like they were a hobby.
There is a woman who shops in our store who will yell at her daughter in public and loudly. One day I heard her tell her daughter, who must be no more than 10, "Listen you little SHIT! You better stop that right now, or when we get home I'll kill you." I am very thankful for the mom I have.
(Sad to say, that above quote is heard in one form or another more often than I care to think.)
Since I lost my teaching job, I now have a lot more time on my hands than I wish. However, it has allowed me to spend a lot more time with my parents than I could before. Tuesdays are "Mom Dates" for me. Mom & I will go out to lunch, and then we will go shopping at the organic grocery store. The one that we used to go to was in downtown Minneapolis. So It was full of people with various body parts pierced & poked, and plenty of blue or red Mohawks. I always found it so funny to watch my conservative, republican mom interacting with these folks like it was no big deal. My mom just can't seem to grasp the necessity of being a mean-spirited, judgmental person. (To be fair, I think she would be classified as a "Crunchy Conservative.")
I don't know how many years my folks have left on the planet, but I find myself more & more thankful for these Tuesdays with mom. Who knows how much longer I'll have them? So I enjoy them to the fullest.
One of my favorite memories from my teen years will be of mom vacuuming outside my bedroom. As was par for the course, my stereo was LOUD. (I didn't even know she was outside the door vacuuming.) So I open the door and there's mom, vacuuming while dancing to Dire Straights.
I know that I am a very fortunate guy to end up in a good home, where there is grace, love & security. Many people don't have that. On this Mother's Day, I want to thank my heavenly father from blessing me with a Mommy of Noble Character. (I am a Momma's Boy, and proud of it.) I couldn't ask for a better one. I hope that you can say the same.
Peace
Joe
Posted by Joe at 11:20 AM