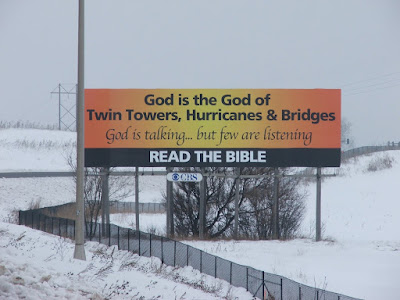 Take a good look at that sign! Let what it says roll around in your brain for a while. I'll come back to it later.
I saw it just south of Lakeville on Hwy. 35W this morning only a few hours ago. It caught me so off guard that I had to turn around and go back to get this shot.
I'm still trying to clear my head of this bit of depression that I am going through. (No, it's not nearly as bad as the last episode.)
For more on that click on this. http://trippingstumblingwhilefollowingjesus.blogspot.com/2009/10/elijah.html
So, as I generally do when the depression hits, I was out driving & listening to some of my churchy podcasts. I was listening to Dan Allender talk about Anger & Lust. When he spoke about how all of us are adulterers & killers at heart, and how we need to embrace our own brokeness if we wish to be faithful to Christ, it just nailed me. I tend to be a bit of a gusher anyway, so I wept big time. But it also made me think about that road sign.
(You would think by now that I would know better than to put myself in these situations. I mean, tear-filled eyes on a freeway at 75mph is not the best combination.)
For more on Dan Allender, try this. http://thepathlesschosen.com/
Well, I'm sure that almost everyone has heard of the comments that the Rev. Pat Robertson made about Haiti yesterday. If you haven't, here is a snippet. Don't worry about watching the whole thing. His offense comes in the first minute.
So, Pat says that the Haitian people made a pact with Satan to win their independence, and this is why they continue to suffer. This from a pastor who has called on the U.S. government to assassinate other world leaders. How thoughtful.
Perhaps Rev. Robertson should have a chat with the Haitian man in this next video.
You know, it's actually rather hard for me to put any of my feelings into words right now, because I am just so livid at the moment. But I think you get the idea of where I am going with this post.
Back to the sign on the Freeway.
I haven't the slightest idea who put it up. But it doesn't take a genius to know where they are trying to go with it's message. God is punishing us because of His righteous anger. It's true, God IS the God of Twin Towers, hurricanes & earthquakes. He is also the God of incomprehensible love, grace & mercy
I will bet anyone who reads this $100 right now, that if you go to the church or organization that put that sign up, you will find a bunch of self-satisfied, self-righteous, graceless & humorless folks who smugly enjoy the thought that God might be punishing people. They will have all of their favorite hoops for people to jump through if they want to be in their Righteous Club. They will be joyfully legalistic, and quite certain in their judgments against those outside their group. (They will probably have at least one broom stick shoved tightly up their exit, so as to assist them in standing tall & proud in their righteous State of Grace.)
What they will NOT have is any sense of compassion or empathy for the average sinner out their who struggles through this swamp of life everyday. They will NOT have taken the time to actually get to know these people they judge. They will NOT actually get down in the blood and grime to help these people with their struggles. In fact, other than voting a certain way, they most likely will NOT have done ANYTHING to tell people the Good News of Jesus or to advance the Kingdom...unless putting up a billboard counts.
The other thing that they seem to conveniently forget is that THEY are also going to be judged someday. I am too. And the fact of the matter is that I have enough crap on my own plate to go about throwing stones at others. What I need is other broken people coming along side me on my journey to help me...and so I can be of help to them too.
I can guarantee you that whoever put up that sign has not been broken by Jesus yet. For that matter, I'm not convinced that Pat Robertson has been broken yet, either. When he makes comments about the suffering of Haiti like he did, I just cringe. When Jerry Fall-well said that God killed the people in the twin towers because we allow gay people to walk our streets, I just fume. And when I saw that sign I wanted to drive back with some gasoline and burn it down.
Make no mistake, we will all be judged someday. All the people, all the countries, all the nations will stand before God on His righteous throne...all of us. But in the mean time, for those who call themselves Believers, Jesus has called us to interact in the world in the same manner that he did. And that means going into the mud, the grime, the pain & the joy...and getting dirty for his glory.
That's how you spread the Gospel! Not by some idiotic billboard.
Peace
Joe
Posted by Joe at 11:16 AM