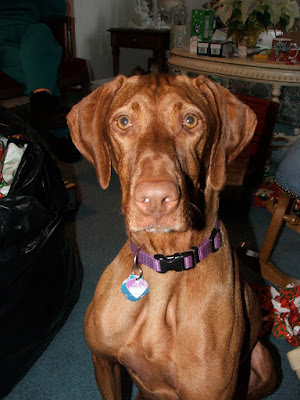 I have a joke for you, OK?
Q: What does a Dyslexic, Agnostic Insomniac do at night?
A: He/she rolls around in bed wondering if DOG really exists! HA!
So anyway, this photo is of the beautiful & spoiled family dog named Rika. She's a Vizula. She is incredibly curious & smart. She also likes to fish. (I mean it...she really likes to fish) She also has enough excess energy to serve as an alternative fuel source.
So why do I bring up my families' dog...other than the fact that she is certainly & obviously better than YOUR dog? (Cats do not count. They were spawned by Satan)
Well, the other day was my sister's birthday and we had a party for her. Naturally, Rika has to be included. So I was watching the dog getting all excited. (She likes to help open presents too.) She will pick up as much wrapping paper as she can hold in her mouth and prance around the room demonstrating her glory.
She got me thinking about something.
Both dogs and humans have limitations. We are both finite creatures. The difference between dogs and humans when this comes in to play is that dogs actually WANT to know their limits. Humans often say that they do, but more often then not we HATE to be told what we cannot do. This makes canines inherently more honest then people.
Examples: Dogs love to know where their territory is and is not. Dogs love to know which toys are theirs that they can then tear into with great vigor. In Rika's case, she knows that when I put the palm of my hand out straight and facing downward, she is to lie down and roll over onto her back.
See, dogs think in pictures. Not words like we do. (Although they can learn hundreds of words for sure.) They also have the concept of hierarchy hard-wired into their DNA. People tend to anthropomorphize animals as if they are 4-legged humans that eat from bowls and can clean themselves with their tongues in places that we would be paid good money for if we could pull that off on a stage.
This is why you get so many stupid pet owners that can never seem control their animals...especially dogs. They think of the dog in human terms. But the fact of the matter is that a dog thinks of US as a 2-legged dogs...with much less fur unless you are Greek or Middle-Eastern.
Dogs understand the concept of hierarchy. That is how they make sense of their world. Dogs know that their needs to be an Alpha Male, or Alpha Female. So in their minds, if YOU, the owner, are not going to be the Alpha, then it is their job to fill that role. Hence, stupid owners that can't control their dogs.
Back in the third Creation story, (That would be Genesis 3) what was the Original Sin? It was NOT taking a bite of the apple. And not just because it was not an apple that Dirt Man and Beautiful Creature munched on. (Yeah, that is how their names are actually translated.) The Original Sin was wanting to be just like God.
Think about it. All of the flaws of humanity stem from not wanting to know our limitations, but instead to be infinite like God. Go back and read the story again if you are puzzled by this. Ever since that occurrence, we have constantly tried to set our own rules, and decide what is right and what is wrong. We still have that attitude deep in our sub-conscience that we ought to be God. If you think I am joking, think about the very first thing that you want to do when someone tells you "No."
Maybe God should have chosen dogs to be the recipient of souls and God Consciousness. We would have probably been rather satisfied with divine belly rubs & chewing on eternally self-healing stuffed duckies. If you pay attention to your pets, they can teach you an awful lot about life & contentedness.
Someday I hope that someone uses this as a sermon illustration. :) It's just a thought.
Shalom
Joe
Posted by Joe at 9:07 PM